A Day at the Grand Canyon- South Rim

This had been on my bucket list for years and it did not disappoint!

How we got there:

Backtracked to have lunch in historic Boulder City

Arrived in Tusayan in the evening to check into our hotel.

Make sure to bring a full tank of gas, drinks and snacks for the ride because places to stop are few and far between.

Grand Canyon Day In a Nutshell:

Visited several outlooks both east and west of the visitor center

Used the shuttle system to reach the furthest outlooks

When we woke up the temperature outside was 28F.  This was a bit of a concern because I thought we were going to be cold but as it turns out the temperature raises pretty fast here, especially on a sunny day.

We drove to the Grand Canyon National Park south entrance, paid our fee, got our updated information in the form of a newspaper and drove in to look for parking.  Note- when we arrived at around 9:15 parking was not an issue, after that however, it seemed to fill up fast.

We parked close to the Visitor Center and headed straight for the shuttle bus stop.  The shuttle bus system is very efficient and a great idea if you are on a time constraint.  Take the time to plan your visit, it makes all the difference in the world.

Since this was our going to be our only day at the park we wanted to do as much as possible. From the Visitors Center, we took the blue shuttle west to the end and transferred to the red shuttle so that we could go as far west as our time would allow. We got off at Hopi point to enjoy breathtaking views of the Canyon and the Colorado River. The day was crisp and sunny, not a cloud in the sky. We then worked our way back east along the rim trail to Powell Point where we caught the shuttle bus going back eastwards to the Bright Angel Trailhead.

It was 11am by the time we got to the trailhead and the temperature was still quite nice when we started hiking down.  The trail is wide enough for two people but since there are folks coming up as well as going down we ended up walking single file.  The trail starts relatively flat and offers very nice views.  Once we got to the first switchback though, it became very steep.  We went further down and at some point, shortly before the first rest house we decided to turn back.   My plan had been to make it to the rest house but we had started close to lunch time and I had a feeling that the hike back was going to be harder- and it was.  We were all very hungry by this point so we had a water/snack break and then made it back up to the trailhead- with several water breaks in between!

From here we walked along the Rim Trail to the famous El Tovar for a late lunch.  The service was good and we enjoyed a nice sit down meal. After lunch we hit the easternmost lookouts in the park.  We took the orange shuttle bus to Yaki point where the views seemed to be more expansive that those in the west but with no view of the Colorado River. Some clouds had rolled in and the different lighting gave the landscape a very different feel

By 5:00 in the afternoon it felt like a full day and we were ready to go back to the hotel.

Partial map of shuttle bus service at the park. Find the pdf version at: 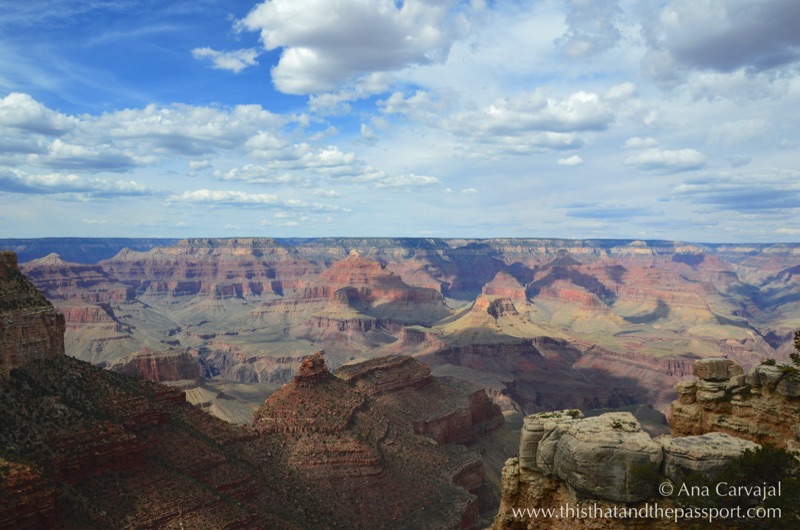 Some tips for first time (and not avid hikers) visitors:

Take hiking boots if you have them.  It made a difference in our group.  Folks wearing plain sneakers slipped several times.

Study the shuttle map before and decide what lookouts you want to visit.  Understand that the shuttle is not bidirectional at all lookouts.

Read the trail descriptions and pick one that fits your ability.  Walking the Rim Trail is nice, but getting down into the Canyon even for just a bit is amazing, it puts it's size and depth into perspective.

If you go with a group, take walkie talkies since there are many places where there is no cell phone signal.

Arrive by 9:00 and hike in the morning.  Even though we started at a nice 40F we were peeling layers of clothing off 10 mins into the hike

Use the shuttle service to go along The Rim Trail. This trail goes along the edge of the Canyon and offers stunning views, it is flat and mostly paved and very easy to follow.  If you have a limited amount of time you can walk along the Rim Trail for a while and then use the shuttle bus service to reach the furthest outlooks or ride it back to the visitor center. 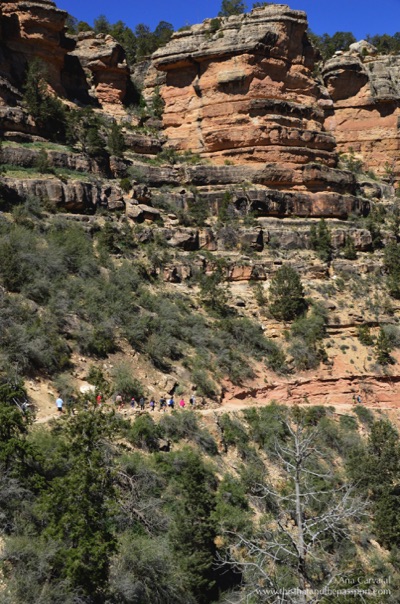 View from the Bright Angel Trailhead in the morning

Bright Angel Trail- those little people on the path include our kids.  This is the beginning of the trail, when it is still relatively flat. 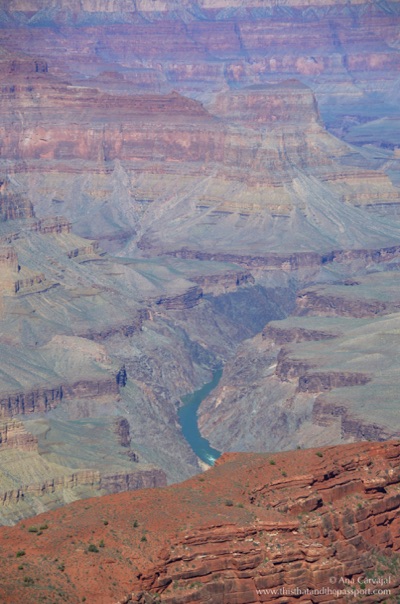 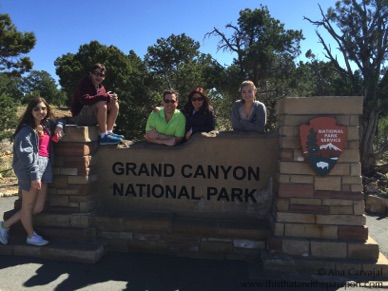 Would we come back? YES from all 5 of us!

More pictures of the Canyon  in my Flickr Album